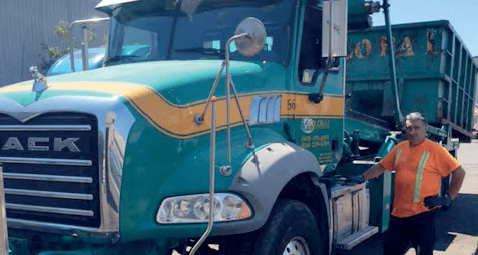 Goodbye to pen and paper. Hello to efficiency and productivity.

Serving industrial, commercial and residential customers in Toronto, Canada and its surrounding area, Global Waste Services has been providing waste removal and recycling services since 1983. The family-run business has grown “one truck at a time” over the years to become one of the largest private waste removal businesses in the city, with a fleet of 25 drivers and vehicles including rear packers, front loaders, roll offs and trailers.

“Global Waste Services is a family-run, traditional business. And up until now we’ve been very old school in the way we run our operations, using the classic tools for communication — two way radio along with paper and pen,” says Orlando Esteves, Global Waste Services’ head of dispatch. “But we have been growing as a business and it’s gotten really busy, making it very difficult to dispatch. We’re handling up to 200 calls a day, and there’s a lot of movement in our schedule over the course of the day.”

The Global Waste Services dispatch team, consisting of Orlando and one other, were fully heads down working steady over a 12-hour shift. Says Orlando, “we were fielding calls nonstop, writing down details. But as you know, service calls are never what they appear. A delivery might become a load and go, and we’d be shifting gears on the fly.” Keeping up with all of the schedule changes was becoming an overwhelming task, and the paper-based approach was starting to affect customer service.

In 2014, Global Waste Services owners, Phil and Joe Pinheiro decided to make the move to a more efficient electronic dispatch approach. “We recognized we needed a more innovative approach if we were going to continue to grow,” says Orlando Esteves. “So we began to look at telematics technology to improve our dispatch efficiency and decided on WEBFLEET”.

Since adopting WEBFLEET, Global Waste Services has experienced benefits across the business. Dispatch is greatly enjoying “life after paper,” and has probably experienced the biggest productivity boost since adopting the telematics solution. Orlando and his colleague are more easily able to keep up with their back-to-back call workload. With all service call details logged directly into WEBFLEET, including organizing of calls, information is more accurate and there’s less confusion. “With pen and paper, it was so stressful and fatiguing. By the end of the day my hand would ache,” says Orlando. “Now with WEBFLEET, dispatch is a piece of cake.”

Global Waste Services has also observed an increase in driver productivity. Using WEBFLEET’s vehicle tracking, dispatch knows a driver’s exact location at all times, and if there’s a delay, relay that information onto the job site. They can also plot out routes that help drivers avoid traffic delays and get them to their destination in the shortest amount of time. Orlando estimates the gains in productivity the company has realized since implementing WEBFLEET have allowed drivers to handle on average two more service calls a day. “We used to do five or six calls a day depending on the location. Now it is more in the range of 8. We have some guys doing 12 calls a day when everything works perfectly.”

The ability to call up historical delivery information in WEBFLEET has also proved to be an invaluable asset for Orlando and his team. “We often have one driver make a delivery, and another will do the pick up. The guy making the delivery might note that delivery required a whole different street, and there’s an underground entry. Now, we can call up that information – even up to four months later, and even show the driver a picture of the exact location and entrance.” Orlando can even drop a pin onto the map to guide his drivers to this drop off location. “In a busy city like Toronto, there are a lot of one way streets and construction. Getting to the drop off point is not always straightforward. It’s not unusual for a driver to experience a 45 minute delay just because he missed the address.”

While drivers were initially hesitant about the idea of being tracked, they have come to readily embrace the WEBFLEET system. The system helps them drive more safely with optimal routing and jobs/messaging dispatched to in-cab navigation devices, respecting hands-free driving laws. And with better reporting, Global Waste Services’ owners are able to track driver’s performance on the job and reward them for their productivity. The most productive drivers each month are now given perks such as movie tickets or dinners out on the company. Says Orlando, “with WEBFLEET we know so much more. We can really take a good look at our business. Over the last month we can see where we were late, where need to improve. With paper, you have none of that information. It was all just guesswork.”